Two-time Olympic 800m gold medallist has clarified she hasn’t brought an end to her track and field career despite joining a South African football team.

Semenya announced on Friday that she was joining JVW Football Club in her homeland.

The 28-year-old is unable to compete without taking testosterone-reducing drugs following a rule change by the IAAF. The governing body introduced the rule change because it argues female athletes with differences of sexual development (DSD) – such as Semenya – have “a competitive advantage”.

Under the rule, all athletes with a difference in sex development should reduce their blood testosterone to a specific level for at least six months – and then maintain that for the rest of their athletic career – in order to compete in events from 400m to a mile.

Semenya is fighting the rule change through the courts, and will not be able to defend her 800m World Championship title in Doha this month.

"To have her play in the league over here is incredible and I think young girls and her team-mates will draw a lot of inspiration from Caster." the Club founder Van Wyk told the Press.

“Caster is a powerful woman. She’s a very strong-minded woman after everything she’s gone through.”

“And, hopefully, that road doesn’t appear again for her if she does take that option in football”

A day after announcing her signing with JVW, Semenya said “Being a footballer doesn't mean I'm no longer a track and field athlete. Just making things clear.” in a post on Twitter. 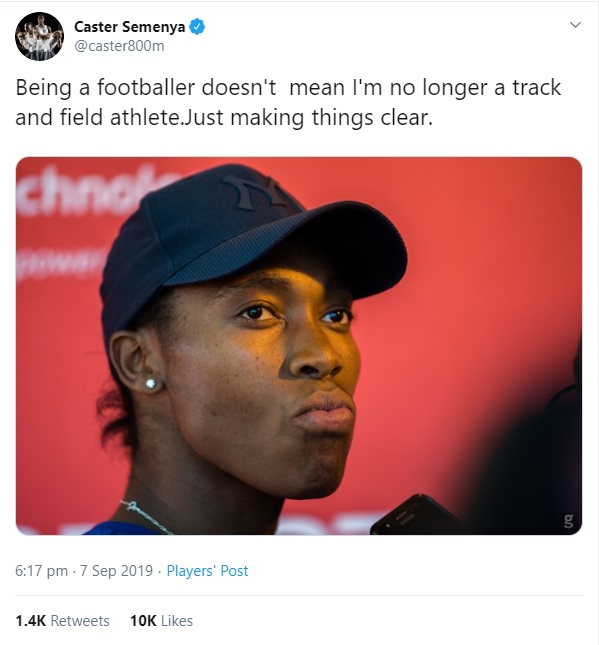 FIFA issued its gender verification regulations in 2011, which give it the power to subject a player taking part in its competitions to “a physical examination” and to ban anyone refusing to submit to one. FIFA said the eligibility of players was evaluated on a “case-by-case basis”, when asked about Semenya’s future plans about becoming a footballer.

Having joined outside the South African transfer window, Semenya cannot start playing for JVW until the 2020 season.