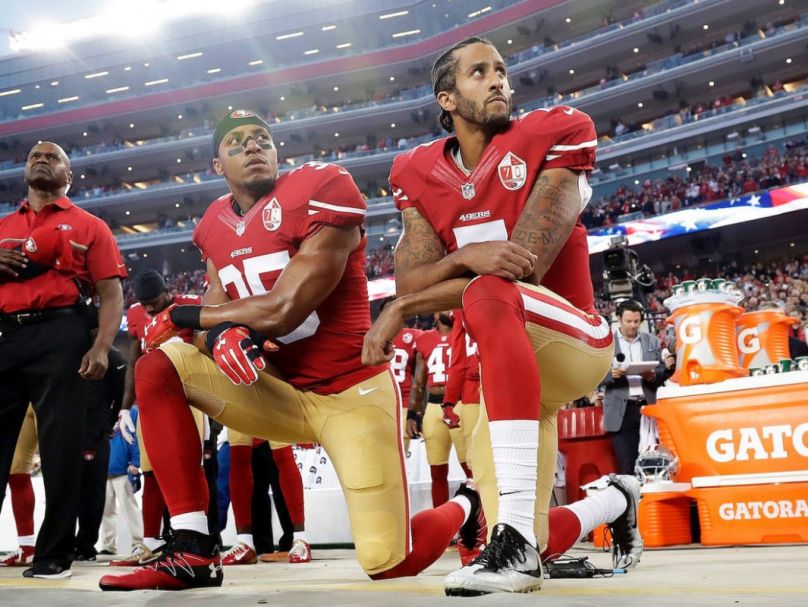 NFL Commissioner, Roger Goodell, has stated that he would encourage a team to sign Colin Kaepernick who has been out of the league since kneeling during the national anthem in a protest against racial injustices.

Speaking to ESPN, Goodell admitted that the NFL banning players from kneeling during the anthem “was wrong to do” and following the ongoing protests in America and other countries over the murder of George Floyd the NFL has now said players can protest during the national anthem. NFL stars such as Patrick Mahomes and Odell Beckham Jr have joined protests and called on the league to “condemn racism and the systemic oppression of black people.”

Colin Kaepernick and fellow San Francisco 49ers teammate Eric Reid originally kneeled during the 2016-17 season stating, “I am not going to stand up to show pride in a flag for a country that oppresses black people and people of colour.” Current President Donald Trump strongly condemned this and called for players to be sacked from their teams if they protested during the national anthem, several players continued to protest in the following years but has been as prevalent as when Kaepernick and Reid first kneeled.

Goodell has now said “We were wrong for not listening to NFL players earlier and encourage all to speak out and peacefully protest. We, the National Football League, believe black lives matter. Protests around the country are emblematic of the centuries of silence, inequality and oppression of black players, coaches, fans and staff. I will be reaching out to players who have raised their voices and others on how we can improve." Many NFL stars have now confirmed that talks have been held between teams on the topic of joint protests during the national anthem with many confirming they will kneel this season, in response to this Trump says he will not watch any NFL side that kneels during the anthem.

Kaepernick has been without a team since 2017 but still feels that he has a place in the league and can benefit a team since becoming an icon fighting against racial injustice.