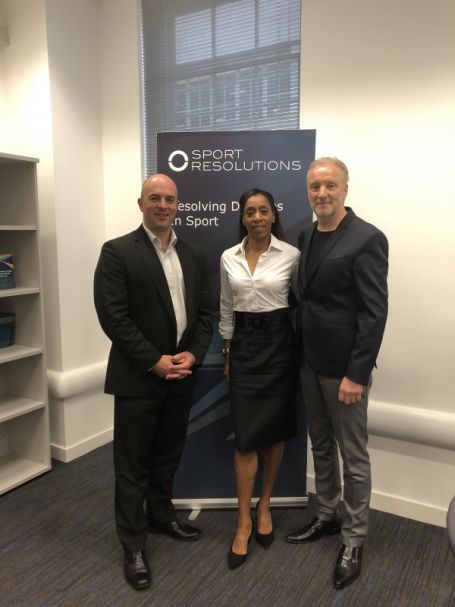 Sport Resolutions (SRUK) held its first breakfast roundtable event to discuss the evolution of dispute resolution in sport with honoured speakers Diane Modahl MBE and Vicente Modahl. It has been 24 years since Diane was falsely accused of doping, and she remains an inspiration to us at SRUK. Indeed her struggle, which caused the bankruptcy of the British Athletics Federation, led to many changes in how sports disputes are resolved including the creation of the independent body of SRUK.

Diane Modahl and Vicente Modahl were the guest speakers at Sport Resolutions’ inaugural breakfast roundtable session. In informative, and often moving, speeches both Diane and Vicente discussed the personal and professional tragedies they had to face when Diane was falsely accused of doping in 1994 at the height of her career. The events that followed a single yet massive error by a testing laboratory in Portugal are the stuff of documentaries and academic case studies. Whilst the legacy of their struggle can be seen in the establishment and growth of SRUK, unfortunately for Diane and Vicente they are still dealing with what they see as a lack of closure and accountability despite Diane having been found to be completely innocent.

“Guilty before being proved innocent”

The testing laboratory had stored Diane’s urine sample inside the stadium for 72 hours where outside temperatures had reached 35°C, causing serious bacterial degradation. The urine sample had had a pH value of 5 at the time the sample had been given but this had increased to 8.85 by the time the sample was tested for banned substances. According to IOC rules at the time, no samples with a pH value greater than 7.5 should have been tested as the sample is no longer considered safe. However the IAAF and IOC did not accept that the sample should not be tested and decided to move forward. The Chairman of the Disciplinary Hearing was recorded saying within the doping station of an international athletics event in Gateshead, UK (and removed by UK Anti Doping as a result of his public views): “You are all guilty until you prove your innocence whether testing positive or not. You are guilty in my eyes, you are guilty in the doping control system’s eyes.”

“Integrity is still not restored in the system” Diane says.

“We still have a long way to go in establishing trust within anti-doping because integrity is still not restored in the system. There have been some developments which is why we are able to sit around this table but until we right what was wrong 25 years ago, no sports person should blindly accept that the system is accountable. There has been no recognition in terms of the human, financial or reputational consequence of what happened to Vicente and I, and the foundations, although well intended, are being built on a false premise, as a consequence they will always crumble. There will never be integrity within the system until ownership of what has been a devastating case has been recognised and remedied by those with power and influence..”

Diane went on to say: “We have to continually use Sport Resolutions as a platform to talk about what is happening now, and what still needs to be done. It is very brave of what the organisation has done to bring us in today because we’ve never been asked to do anything like this before, and this opportunity provides progress in the right direction. We’re grateful that we were able to share the human cost of our story which can be so easily forgotten.”

Importance of panels that are independent of the governing body

In Diane’s case the panel was not independent which exacerbated the sense of unfairness.

Edwin Glasgow QC, the Independent Chair of Sport Resolutions stated: “I hope that all sports will stop pretending to be able to regulate themselves. Some of the biggest sport organisations are still trying to run their own disciplinary bodies. I believe Sport Resolutions’ success lies in the integrity and transparent independence of our Panels and in the fact that we have absolutely no connection financially, or otherwise, with the parties involved in a case.”

No compensation for costs of a successful defence

Sport Resolutions provides a speedy and efficient resolution service using a panel of highly qualified lawyers and other specialists.

The use of SRUK should avoid the need for compensation claims, and indeed a possible culture of advertised compensation services, on the basis that fair, expert and transparent processes are followed at all times.

Diane and Vicente’s case is a salutary one in this respect alone: they spent £480,000 in proving Diane’s innocence, selling their house and losing earnings from performance and coaching.

International standards to be developed and aligned

Sport Resolutions is a leader in its field, recognized in different parts of the world and asked to assist in developing a similar blueprint and model in those territories.

Diane asks “When things go wrong, what’s the remedy? Sport dispute resolution is definitely evolving in the right direction however it’s not whole yet. It’s part of the story. Ultimately the integrity of an organisation is reflected in its culture and values. It is about governance - doing the right thing, at the right time for the right people. Vicente and I often asked the question who is testing the testers, who is managing the sport and can they be trusted? We must continuously talk about the remedy until we get it right.”

Morality to be promoted as well as process

Diane and Vicente commented on how the last time they were sat around a table of lawyers and sports media it was a very different atmosphere. They welcomed the opportunity to discuss their journey amongst experienced professionals at SRUK’s breakfast roundtable, and raised the aspect of closure: whilst the loss of their combined livelihoods plus the impact of stress on their health can be looked at in terms of financial cost, they have yet to be personally greeted and apologized to by individuals and bodies directly involved in their case (and indirectly leading to their victimisation in the media). This is the morality as separate to the process. And as some of those individuals are still involved in sports bodies, and now often in higher positions, Diane and Vicente are from time to time unfortunately reminded of their pain.

Theirs is a truly a tragic story. It should also prove an inspiring one to anyone looking to protect sports integrity.

Richard Harry, CEO of Sport Resolutions, added that Diane’s case was: “important in sport/legal history, and one that everyone involved in sport, anti-doping and law should take the opportunity to learn from so as never to repeat the same mistakes again.”