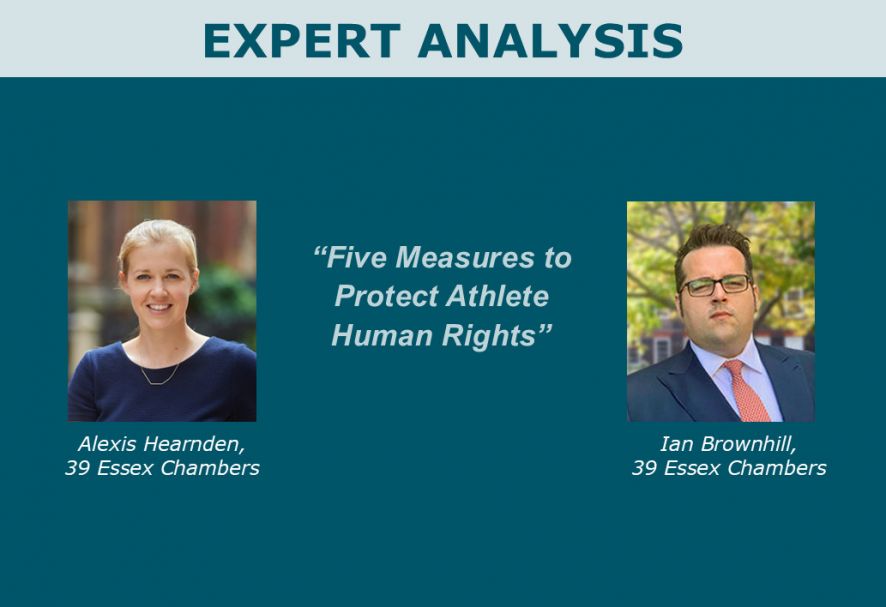 The International Olympic Committee (IOC) called the execution of Iranian wrestler Navid Afkair, "very sad news" and said their thoughts were with his family and friends. Amnesty International were stronger, they described it as, “travesty of justice.”  Afkari was convicted of killing a security guard during anti-government protests in 2018 and claimed to have confessed to the killing under torture.

Navid Afkair is not the first athlete to have his fundamental rights infringed by the State. Footballer and pro-democracy athlete Hakeem al-Araibi was forced to flee Bahrain and resisted efforts for him to be returned there after Bahrain obtained an Interpol “Red Notice”. Calls for the IOC and FIFA to impose sanctions against Bahrain and Thailand (where he was detained under the Red Notice) did not prove fruitful (perhaps complicated by the fact that the FIFA vice president was Sheikh Salman al-Khalifa, a Bahraini royal). Iranian judoka Saeid Mollaei was ordered to intentionally lose a match in the World Championships, in order to avoid a possible gold-medal bout against an Israeli opponent. And in 2018 FIFA examined claims of sexual and physical abuse by men from the country’s football federation, including its president, against members of the Afghanistan women’s football team.

The reality is that sporting talent and being a representative of one’s country is no shield against abuse from state agents. In this article, we suggest five means by which we can better protect the human rights of athletes:

1- Recognise that athletes are vulnerable to abuse. The cases mentioned above highlight the political pressures which may come to bear on elite athletes.  Their profile and position make them potentially powerful advocates (for example Lewis Hamilton lending his voice to the BLM movement) but also vulnerable to retribution (e.g. al-Araibi above, and the less extreme but still life changing impact on Colin Kaepernick after he “took the knee”). The scandal in American Gymnastics and the sexual abuse of scores of young gymnasts by national team doctor Larry Nassar is a salutary reminder that sport affords an opportunity for adults to work in close and intense quarters with young people, who may be vulnerable to exploitation. Safeguarding athletes starts with recognising the power of sport, and the power of those higher up in a sports hierarchy (including governing bodies and committees) to influence and exploit junior athletes.

2- Build human rights from the grass roots up. Safeguarding in sport has grown from grass roots up, it is a staple part of sports law and there is an expectation that every club will model good safeguarding practices. Just as every sports club and team has a person responsible for safeguarding, we would suggest that they should have an individual dedicated to the promotion and protection of human rights.

3- To host an international event, a country must meet international human rights standards. In just over 400 days, Beijing will host the 2022 Winter Olympics. The Chinese penal system includes labour prison factories, detention centres, and re-education camps. In just over 700 days, Qatar will host the FIFA World Cup. Qatar retains the death penalty and homosexual acts are capital offences. For athletes to be properly protected, international governing bodies and committees must embed human rights standards into their decision-making processes. We would suggest that a country which has the death penalty, or where women are not enfranchised, are not countries which should be able to host international sporting competitions and welcome the move by FIFA to include human rights requirements in bidding criteria for 2026. Similar analysis applies to club ownership, recently brought into sharp relief by Saudi Arabia’s Public Investment Fund bid for Newcastle United Football Club.

4- Implement fully The European Sports Charter. The European Sports Charter (est. 1992) and has been subject to consultation and review in 2020 (with a view to a revised Charter in 2021). Its goals include protecting and developing the moral and ethical base of sport and human dignity and safety of those involved in sport by safeguarding sport, sportsmen and women from exploitation for political, commercial and financial gain and from practices that are abusive such as drugs and sexual harassment and abuse. We suggest that the Charter is fully implemented at domestic level to promote these values from grass root level upwards.

5- Protect the practice of sport as a human right. At present, sport is not protected legally as a universal human right, but there is a growing recognition of the importance of freedom to practise sport, without discrimination, in a way which requires mutual understanding, solidarity and fair play.  The transnational and unifying effect of sport makes it uniquely placed to promote human rights and inclusion.  To that end, the Centre for Sport and Human Rights was set up in 2018 and is chaired by Mary Robinson, former President of Ireland and former UN High Commissioner for Human Rights. Its aims are threefold: the prevention of human rights harms from occurring through sport; access to effective remedy; promoting a positive human legacy from sport and sporting events. Those goals, we suggest, would be assisted by recognition that the practice of sport is a human right.

The opinions expressed in this publication are those of the authors. Th​is work was written for and first published ​on Sportresolutions.co.uk and the copyright is owned by Sport Resolutions. No part of this article may be reproduced in any form without permission in writing from the publisher, except by a reviewer who wishes to quote brief passages in connection with a review written for inclusion in alternative media. Digital or hard copies of this work (or part, or abstracts, of it) for personal use shall not be distributed for profit or commercial advantage.