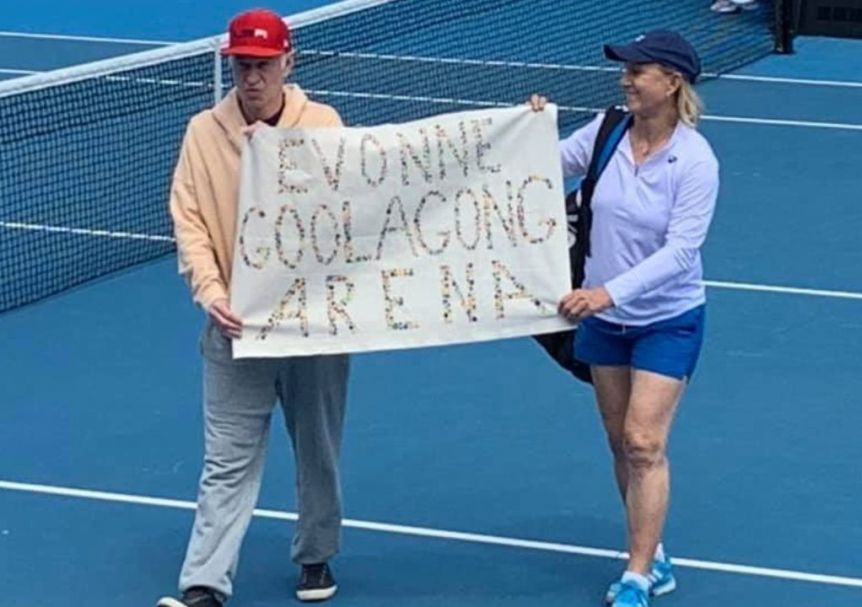 Martina Navratilova and John McEnroe revealed a banner at the Australian Open calling for the Margaret Court Arena to be renamed the Evonne Goolagong Arena.

Following a legends match on an outside court the pair unveiled the banner which was designed by Navratilova in an Indigenous Australian style to honour Evonne Goolagong Cawley who is an Indigenous Australian seven time Grand Slam Champion, with the pair saying that she is more deserving of having the arena named after her rather than Margaret Court. Navratilova had begun a speech using the vacant umpires chair microphone rallying for others to join in the push for the renaming of the arena but was cut off and the live feed of the court was also ended.

The pair were protesting against Court and her views on the gay, lesbian and transgender community, of which she has spoken out against in recent years with comments such as transgender children are the “work of the devil” and also writing an open letter to Australian airline Qantas where she claimed she would no longer use their service as they were promoters of same-sex marriage. Court became a Christian pastor and has been outspoken since, also claiming that tennis is “full of lesbians.”

Navratilova has frequently opposed Court’s views, whilst also previously arguing that the arena should be renamed to the Evonne Goolagong Arena and she did not attend this week when a ceremony was held to mark Court winning all four Grand Slam titles in the same calendar year stating “you don't want to diminish in any way Margaret Court's achievements. She was celebrated yesterday for winning the Grand Slam 50 years ago - absolutely. But when buildings are named after you, or airports, or streets, it's the body of work, it's not just one part of your life and then ignore the rest. I did not watch it, I did not partake. I did not go. I'm protesting by absence. But the correct thing to do, I think, is to honour her win.”

McEnroe earlier this week commented “there’s only one thing longer than the list of Margaret Court’s tennis achievements: it’s her list of offensive and homophobic statements. During the apartheid regime in South Africa, she said: ‘I love South Africa. They have the racial situation better organised than anyone else.” He also condemned her views on the LGTBQ community and has stated that he hopes Serena Williams breaks her open era Grand Slam title record “so we can leave Margaret Court and her offensive views in the past, where they both belong.”

Tennis Australia had confirmed that Court’s achievement would be celebrated but expressed that it does not agree with her views as they do not align with their values of “equality, diversity and inclusion.” After Navratilova and McEnroe revealed the banner the organisation said that the pair had breached protocol.